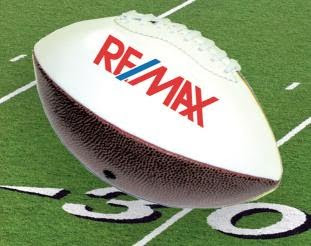 Well, football season is officially here. In watching a game recently it occurred to me that many of the qualities necessary to be a great athlete are much the same as those to be a great real estate agent. I set to work doing some research on the matter and I found a compelling article about mental toughness in sports and in business. Do you have the mental toughness and resiliency to be unbelievably great no matter what the market throws your way? Read on, I think you'll find that you possess many of the qualities of your favorite athlete. Like the article says, both in business and in athletics, technical skill alone won't win the game.

Keep up the great work in your business. Have a fantastic weekend and catch a game if you can!

The business world just keeps getting more complex. Indeed, a recent study by IBM of 1,500 global chief executive(Capitalizing on Complexity) indicated that they felt the greatest issue facing them was the escalation of complexity. Complexity and turbulence in the business environment may be here to stay, but they present opportunities as well as challenges for leaders. As a business school dean, I run a more than $80 million business in an increasingly competitive marketplace. With over 33,000 stakeholders, I know the pressure isn't going away, and so do other leaders in my organization. More likely, it will intensify. Still, I say, "Bring it on!"

Let me explain. My son plays soccer in a competitive league. He practices three days a week and trains in specific skills with his coach. Also, he and I train together. Not only do we run sprints and engage in long bike rides to build speed, endurance and strength, we also work on the mental game associated with playing competitive sports.

Research and common sense tell us that top competitive athletes succeed because of their physical talents and their dedication to training. However, they also succeed because of their dexterity in dealing with the psychological pressures of a sport. In short, mental toughness and resilience are tremendously important for any athlete aiming to be the best in a sport.
As a result, many athletes engage in training their psychological readiness. At the root of mental training in sports is this question: Are you mentally tough enough to compete?

It is not simply a matter of my son's knowledge, ability and skill in soccer. It is also his psychological preparedness for the game, including skill in dealing with the stress of strong competition, recovering from mistakes and failure quickly, determining strategies to tackle tough situations, adjusting with each circumstance and game, collaborating with a team, celebrating successes but not becoming overconfident and keeping positive before, during and after the game.
Using research and literature from sports psychology, such as James Loehr's The New Toughness Training for Sports, my son and I actively work each week on his mental game. When we do so, I recognize dramatic similarities to conversations that I have with business executives.

Many have shared with me that their companies have taken a brutal pounding for the last two years, and even those who have had some success are citing fatigue in this new complex game of business. But, just as with athletes, they don't rely only on knowledge, skills, ability or past success to traverse difficult situations. They draw on an attitude, a toughness that allows them to push through hard situations and face adversity with confidence. As businesses look to the future, their top people need to think about whether they have game-ready leaders who not only have technical skills in business but mental toughness as well.

There are at least six markers of mental toughness from sports psychology that apply equally well to business situations. As with athletes, business leaders need to ask, am I mentally tough enough to compete?

1. Flexibility. Game-ready leaders have the ability to absorb the unexpected and remain supple and non-defensive. They maintain humor even when the situation becomes tough. If something isn't going well or doesn't turn out as expected, they remain flexible in their approach and look for new ways to solve the problem. Just like a quarterback faced with a broken play, a leader may have to decide quickly on a different way to get the ball down the field.
Also, leaders must continually be open to re-educating themselves, even in the basics, which they may have taken for granted for too long. They need to exercise caution in defensively falling back on ideas they know and are comfortable with rather than looking for new ways of doing business.

2. Responsiveness. Game-ready leaders are able to remain engaged, alive and connected with a situation when under pressure. They are constantly identifying the opportunities, challenges, and threats in the environment. They understand that they need to think differently about how their environment and business operate.

The problems we encounter now are messier and more complicated than ever before. They often can't be solved in the ways others were. Game-ready leaders look for new ways to think about these problems and, more important, look for fresh ways out of these problems. They have a sense of urgency about responding to the changing face of business.

Just as a coach may change strategies at halftime in response to the way a game is going based on the opponent's strengths and weaknesses, game-ready leaders in business must respond to changes in the environment and the players.
We must pay close attention to and understand global, national, regional and local economic trends, market trends, consumer trends, industry trends and competitor responses. Relying on old assumptions about how business operates and assuming that last year's trends still hold today is dangerous. Leaders make decisions and act based on up-to-the-minute and in-depth knowledge of what is really going on in business now.

3. Strength. Game-ready leaders are able to exert and resist great force when under pressure and to keep going against insurmountable odds. They find the strength to dig deep and garner the resolve to keep going, even when in a seemingly losing game. They focus on giving their best and fighting hard until the end, with persistent intensity throughout the game.

The story of Team Hoyt, Dick and Rick, is an inspirational example of drawing on both inner and physical strength. Rick was born in 1962 to Dick and Judy Hoyt and was diagnosed as a spastic quadriplegic with cerebral palsy. His parents were advised to institutionalize him because"there was no chance of him recovering, and little hope for Rick to live a 'normal' life. This was just the beginning of Dick and Judy's quest for Rick's inclusion in community, sports, education, and one day, the workplace. In the spring of 1977, Rick told his father that he wanted to participate in a 5-mile benefit run for a lacrosse player who had been paralyzed in an accident. Far from being a long-distance runner, Dick agreed to push Rick in his wheelchair, and they finished all 5 miles, coming in next to last. That night, Rick told his father, 'Dad, when I'm running, it feels like I'm not handicapped.' At that moment, they formed Team Hoyt and have run many races together with now impressive times. The 2009 Boston Marathon was officially Team Hoyt's 1,000th race." (Adapted from the Team Hoyt website.) Just as athletes dig deep to find the physical and psychological strength to continue through adverse and tough situations, game-ready business leaders must exhibit the same strength. As James Loehr puts it, top athletes think, "While this is tough, I am a whole lot tougher." Game-ready business leaders bring the same intensity, through all the continual pounding.

4. Courage and ethics. Game-ready leaders do the right thing for the organization and the team. They suppress the temptation to cut corners or to undermine others so they come out on top. They have the courage to make the hard but right decisions for the organization.

A famous story I share with my son as an example of courage and ethics in sports is that of the tennis player Andy Roddick. In 2008 Roddick was the No. 1 seed at the Rome Masters. He was at match point and about to win. The umpire called his opponent for a double-fault serve. Walking to shake his opponent's hand, Roddick noticed a ball mark on the clay--in bounds. Roddick got the umpire's attention and pointed out that the ball had nicked the line but was in fact in bounds. The match continued. Roddick went on to lose the match, and his beyond-the-call-of-duty honesty made him famous as an upstanding person, an opponent who would do the right thing. Game-ready leaders in business do the same. PepsiCo provides a great business example of this. A disgruntled Coca-Cola employee and two other individuals attempted to sell proprietary information to Pepsi. Pepsi received a package containing a sample of a new Coke product and other information. Pepsi immediately informed Coke, which contacted the FBI. Game-ready business leaders ultimately win by making the right and courageous decisions.

5. Resiliency. Game-ready leaders rebound from disappointments, mistakes and missed opportunities and get right back in the game. They have a hardiness for enduring the downs of a situation. They remain optimistic in the face of adversity and quickly change when necessary.They resolve to make things better and are experts at figuring out ways to do more with fewer resources. How about the resiliency of Detroit Tigers pitcher Armando Galarraga, who was just one out away from pitching a perfect game when Jim Joyce, the first-base umpire, called a runner safe who was indeed out? Joyce had made an error. Galarraga was certainly deeply disappointed, but he continued to pitch and get the next batter out. Afterward, Joyce admitted the error and apologized. Galarraga shrugged it off, saying, "Everyone makes mistakes."

6. Sportsmanship. Game-ready leaders exhibit sportsmanship. They don't let the opponent know when he or she has gotten them down. "Chin up," I say to my son. Clearly we all experience disappointment, attacks from others, an occasional blow to the stomach. However, the behavior exhibited by game-ready leaders after losing or being attacked by others or the situation sets the tone for the rest of an organization. Additionally, top athletes support their teammates and their roles. If teammates start competing with and attacking one another, it is definitely difficult to win.

Living in Denver, I follow the Denver Broncos. Kyle Orton has done an outstanding job of displaying sportsmanship while under public scrutiny. Brought to the Broncos last year, he has been the subject of constant press speculation about possibly being replaced. The drafting of Tim Tebow brought on another press outcry, that Kyle was out and Tim was in. Kyle handled it with grace and dignity. Putting his mind to the game and the team, he got on the field and simply practiced hard, welcoming his new teammate. In the face of even internal competition, Kyle Orton exhibits the mentality of "Bring it on!"

We all need these same markers of toughness to succeed and lead in today's business environment. We cannot succeed on technical skill alone. Companies have tough questions and situations to address. Game-ready leaders go into today's business environment with their best mental game and with the attitude of "Bring it on!" After all, who doesn't love the challenge and fun of a demanding, complex game?

Have a great Day!