I'm Proud of our troops & proud that I work for a company that supports them... 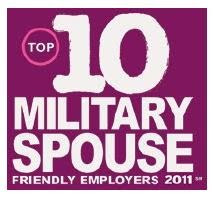 Denver, CO (Vocus) For the fourth year in a row, in recognition of its commitment to military families, RE/MAX has been named a Top Ten Military Spouse Friendly Employer by Military Spouse magazine. This year's Top Ten was selected from a pool of more than 2,500 large companies, and RE/MAX, once again, is the only real estate company to make the list.

"Military spouses make excellent, dedicated employees," says Dave Liniger, RE/MAX Co-Founder and Chairman of the Board. "They are sacrificing for our country, and RE/MAX hopes to make the lives of military families a bit easier at a most difficult time.

"The innovative military employment program, Operation RE/MAX, has been helping military spouses and former military personnel find jobs in real estate for the past four years. Created in cooperation with the Department of Defense, the program matches members of the military community with volunteer RE/MAX brokers, who have made a commitment to coach, train and mentor military personnel.

As a result of the success of Operation RE/MAX, the company was honored with the Office of the Secretary of Defense Exceptional Public Service Award in 2007. The prestigious award is one of the highest given to civilians, and was presented to Gail Liniger, Co-Founder and Vice Chairman of the Board, in a special Pentagon ceremony.

Operation RE/MAX has earned the cooperation of over 500 military installations and enlisted the support of more than 700 individual RE/MAX offices. Most importantly, it has placed more than 1,100 military spouses in jobs all over the world.

"Military spouses have a desire to perform well, a dedication to get the job done, and they honor their commitments," says Liniger. "In the real estate profession, military spouses have a built-in clientele because they have a personal relationship with many families who are moving regularly and trust them.

"RE/MAX is joined on the Top Ten list by other high-profile organizations like USAA, Home Depot, T-Mobile and Kelly Services. To make the list, companies were required to produce at least $1 billion in annual revenue, and have specific military employment programs in place.

The annual list is a "who's who" of large corporations that were evaluated on their efforts to recruit military spouses, which make up a talent pool of more than 1.1 million; 93 percent are women. The Top Ten list is featured in Military Spouse magazine's October 2010 issue.